Last month, I was lucky enough to go along to the Monaco Yacht Show on a work trip.

I was so excited to go but I was also very nervous as I wasn’t sure what to expect!

The Monaco Yacht Show is a pretty big show with 600 exhibitors and 30,000 visitors coming through the doors.

This year, there were 125 superyachts to see worth €4bn in total and they were INSANE.

There were chandeliers, rotating sunbeds, leather bound coffee machines – you name it, it was there.

It was a really amazing experience and although it was a hectic few days, I enjoyed it so much.

I didn’t get to see much of Monaco because we were so busy at the show but from what I did see, it is such a beautiful place.

We ate at Planet Pasta on the first night of the show (there seems to be a lot of Italian restaurants in both Monaco & Nice) & the food portions were huge & absolutely delicious. Just what we needed after a busy first day. 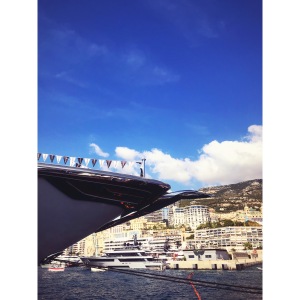 I also managed to stop by a church while we were waiting for our Uber driver one night. (Sidenote: you can get an Uber from Nice to Monaco but you won’t be able to get one back as Uber doesn’t currently run out of Monaco. It’s worth keeping a taxi driver’s number handy if you don’t fancy getting the train. More about that in a sec.)

The church was named after the patron saint of Monaco, Saint Devote and it’s well worth a look inside if you’re passing. Apparently Grace Kelly left her wedding bouquet there when she married Prince Rainier.

It’s actually quite close to the station (Gare de Monaco) so if you’re hopping off the train, take a little stroll to see it.

We caught the train into Monaco a few times and although it’s undoubtedly the cheaper option, it was very crowded in the mornings – when it’s warm and you’ve got a backpack on, it’s hard not to get a sweat on. I think it was especially busy because the show was on but it was also rush hour for the locals. Think London Tube in the summer. 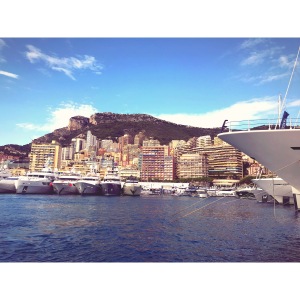 In the evenings, it was a bit quieter and we could get a seat. Leave plenty of time to get to your train though – you have to walk up a very long corridor to get to the platforms from the Port Hercules entrance.

We stayed in Nice which was absolutely gorgeous – I’d really love to go back for a short break.

When we first arrived, we went to eat at a restaurant that I’ve been gazing at on Instagram for weeks now – Le Plongeoir.

It’s in an amazing location – almost just perched on a rock in the sea and its history is so interesting. It started life as a restaurant years ago which featured a fishing boat you could eat in! When the boat got damaged, it fell into disrepair and the location was used for diving boards.

Now the restaurant sits alongside these diving boards and it is just THE most incredible place to sit and enjoy a beautiful sunset with a glass of wine.

The food is beautiful – every mouthful is a new flavour! – and I can definitely recommend ‘The One’ cocktail if you like something a bit sweet. Even if you just stop by for a drink, this place is just divine.

We also walked through the Old Town in the evening which was abuzz with people eating al fresco and just had the most lovely atmosphere.

We stopped at a cosy little restaurant called L’Escalinada which was down one of the typically French side streets. The waiter was lovely & the food was gorgeous – I’d recommend getting a bite to eat here.

Before we left on Saturday morning, we had a wander through the streets of Nice and towards the sea front. The sun was shining, the markets were busy and we sat at one of the cafe’s to watch the world go by for a while. 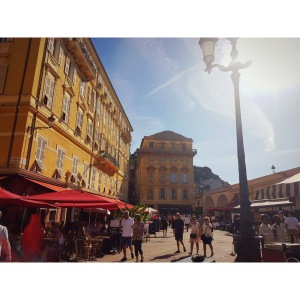 It was a gorgeous place to visit and I’d definitely go back for a long weekend with my loved ones to explore the historical sites of the city one day.

For now, I’m happy with the memories of a great trip with my work pals.